Because of Covid restrictions the British American Football Association took the decision to restrict the travel of the Premier teams this year, so created a flat league structure for Scotland. That means all of the Scottish BAFA teams will play each other once for a ten game. Hence the reason that the Broncos will play the Colts later in the season.

On Saturday each of the Grangemouth teams played the visiting Comets and Raptors.

In the first game the Broncos, who were fourth in the UK in 2019, were favourites against the Division 1 Raptors. But the Raptors were on an upward trend as lockdown hit. Plus, the Broncos are trying to integrate four new players to the squad. 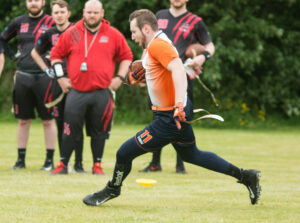 The Broncos started with the players from the 2019 season and dominated the game, stopping the Raptors first two drives, and got themselves a 13 – 0 lead courtesy of the familiar combination of McKenzie to  Woods, two touchdowns to Callum and an XP to Kevin. On their third drive the Raptors inevitably scored with their long ball combination. 13 – 6. By this point coach Fraser Thomson had begun to ring the changes. The first of the new squad players to make an impact was Grant Isdale, making a return to the team he played for as a Youth. Passes from McKenzie to Isdale for TD and XP meant Grant kept up the scoring rate he had as a Youth. Luke Morrice caught is first interception of the year to frustrate the Raptors again, but an errant throw from McKenzie returned the ball to the Raptors with a short field from which they duly scored. Before the half, the McKenzie Woods combination struck again with Kevin catching a TD and XP. 27 – 12

The second half was less exciting, unless you like defensive football. Isdale recorded a second set of TD and XP  and the defence kept the Raptors penned in, with Morrice catching a second interception. The Broncos ran out reasonably comfortable winners, 34 – 12. 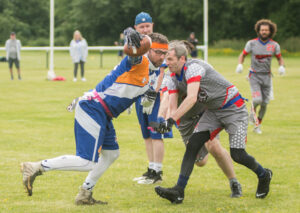 The Colts too have added to their squad in the long covid hiatus. But their first game was against a Comets team that included Scotland and Great Britain past and present players, with Neil Arnold, one of the most successful QBs in the British game behind centre.

Andy Brown at QB showed signs of the long layoff with two early interceptions. GB Lion Bud McFerrin made the most of the first and despite a sack from Paddy Mckernan (in his first BAFA League game for the Club) the Comets also converted the second. A third TD before the half gave the Comets a 20 – 0 lead.

The second half started much more positively with an interception for Craig Hutchison. That was converted into points when Broony passed to Steven Cliffe for a TD. 6 – 20. The Comets restored that three game lead with another TD. By this point of the game though the Colts had shaken off some of the rustiness and Cliffe got into the end-zone for a second TD, with new player. Jason Maclean converting he XP. 13 – 26. A late interception gave the Comets one last opportunity to score, which they duly did. The last score maybe overstated the balance of play a little, but the game film will be an interesting watch. 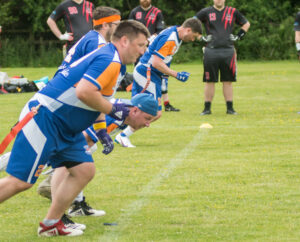 The Colts then went straight into their second match of the day against the Raptors. In the early exchanges the scores were close, with the Colts methodically driving the field while the Raptors used the “long ball” to get down the field in huge chunks. The Colts were first to score with a pass from Brown to Jason Maclean and an XP to James Duffie. The Raptors score next with the long ball that the Colts failed to cover. An interception returned for a TD, plus a 2 point XP gave the Raptors the lead. Brown to Duffie for a TD brought the Colts back into the game but a third TD and a 2XP gave the Raptors a 23 – 13 half time lead.

A ten point deficit going into the second half should not have been insurmountable, but the Colts lost much of the poise they had been showing and failed to answer three Raptors TDs. One bright spot in the second half was a second interception from Hutchison, but that didn’t counter four interceptions thrown by the Colts.  A 43 – 13 loss was a real disappointment, but the Colts have a month to sort out the issues before their next game day.

The final game of the day was between the Broncos and the Comets. On paper the Broncos should be favourite, but with the personnel in the Comets team they do have the ability to cause some upsets. 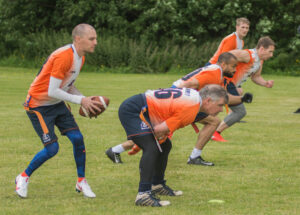 The Comets started with the ball and both teams scored TDs in their first two drives, the Broncos scoring their first when McKenzie passed to Isdale for the TD, then to Jimmy Thomson for the XP. The second TD came courtesy of a McKenzie run. Isdales XP was the difference between the teams. 14 – 13. A sack from new player, Sarah Wakelin, helped the Broncos stop the Comets and then take the upper hand when McKenzie connected with Callum (TD) and Kevin Woods (XP). 22 – 13. Another new player, Dante Fornasiero, caught an interception to further pile the pressure on the Comets allowing McKenzie pass for a TD to Kevin Woods and a second XP to Thomson. 29-13 at the half.

The Broncos failure to score in their first drive of the second half gave the Comets the opportunity to get back into the game. Grangemouth’s fourth new addition to the squad, Thomas Campbell, then got in on the act scoring his first TD for the team. The Comets, led by Arnold were not out of it yet. They scored again to keep it a one score game. 35 – 27. But pressure from Wakelin and an interception from Morrice meant the Broncos could use up the final seconds on the clock to record a nervy second victory of this year’s campaign.

Many thanks to Grangemouth Rugby Club for the use of their facilities for the games.