On Saturday 9th November our new Ladies team were given a great opportunity. The chance to play against three very well established teams. A team had pulled out of the OPAL tournament at Ravenscraig and we were invited to take their place in the schedule.
Putting this into context – Our girls have been practicing for just four months. Two of our players have experience of playing flag, and two have played tackle football before. Of the other five dressed for the occasion, four got to play in the Charity tournament at Carnegie, and one had been to one practice session. The would be playing against teams that have been around for years, and included a number of Great Britain candidate players.
Our girls were ALL fantastic. They played far above the level that many (outside of the Club) will have expected. The coaches knew how well they could play, but how well would they play on the day? While there were some obvious early nerves, once they got into the games, they just got on with it. 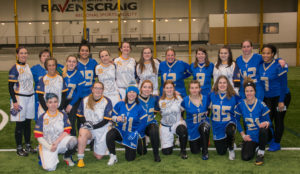 Game one was against Manchester Titans. And the Fillies were first to score! Saskia Köttler breaking through for the TD. While the Fillies made a few defensive stops, the Titans did get a couple of scores before the half – 6 – 13.
Into the second half and the Titans found a hole in the inexperienced Grangemouth Defence and explouied it with pass after pass to their top receiver in the game, #11 McDermott.
The game finished with a 41 – 6 defeat, but already so much more experience. 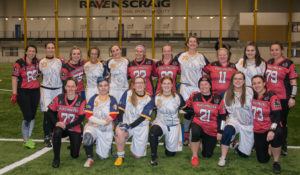 Into the second game against the game against Chorley Buccaneers, another team with a long Flag history.
The added experience from the previous game was evident with an early interception from Lauren Gibbon. But it was the opposition who scored first. 0 – 6. The Fillies heads didn’t go down (never did all day) and Megan Shelley was the next to score. 6 – 6. Again though, the Fillies were down at the half. Again 6 – 13.
Gemma Gow got the first of two sacks just after the re-start and the Fillies got right back into the game with a second TD from Shelley. 12 – 13
The Buccaneers extended their lead to 8 points.
Bethany Thomson, with a week’s practice for the QB role had been playing so well, but an interception was almost inevitable. That gave the Buccs another opportunity to score, which they duly did.
The game ended with a much improved scoreline from the Fillies point of view, but still a defeat, 12 – 26.

In the final game of the day, the Fillies were playing the East Kilbride Pirates, one of the top teams in the UK regularly over the past few years. Yet another game where the Fillies were still in the game at the half, this time down 6 – 18. The TD coming from Köttler. Into the second half and the Fillies were still moving the ball up the field, they just couldn’t quite punch it in for the score. The final score, 36 – 6.
After each of the games, the coaches and players from the other teams were quick to acknowledge that the Fillies were much better than had been expected from a brand new team.
Lynsey McFadyen proved her worth to the team with spells at almost every position, including Qarterback, Corner and Safety
Alison Woods spent most of the time on defence at Cornerback. Some of the skills of her two boys were more than evident.
Michelle Holburn-White suffered from that well known problem of being the best known offensive target, and drew some of the better defenders.
Teri Doig, with only one practice session under her belt was expected to get only a bit part for the games. However, when she was asked to spell the Blitzers, she made a good job of it and was kept in by the coaches, making at least a few tackles.
Kim Duncan, while at the games, decided she wasn’t quite ready for game time, so she didn’t suit up.
One of the coaches voiced a target for the day. A score in each game and a couple of defensive stops. The girls got all of that and more. A great all-round performance form everyone.