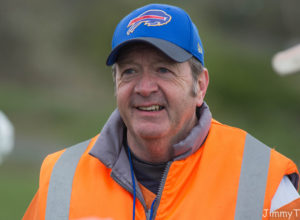 David “Stonehands” Mooney started playing for the Broncos in 2003. He was a regular player throughout his time at the club, other than through injury or clashes with another passions Burns Nights.

In 2017 when the Colts team was first discussed it brought new opportunities for gametime action.

Also, after the departure of Coach John Myles Mooney had taken on the reins of the Broncos team. With the arrival of the Colts he took a step back and led the Colts to a fantastic first couple of seasons, getting into the post season in 2018 and 2019.

When the Covid Pandemic came along in 2020 he had already announced his intention to end his playing career (with a final tournament playing with David Jnr in Flagging New Year.

Two years on from his retirement, as he is inaugurated into our Hall of Fame, he is still in the top ten All-Time for games played and points scored.

David’s input to the club over the years has been immense. He has been an enthusiastic contributor, calming influence, ardent supporter, determined player and has never been backwards about coming forward and making his opinion known. His contribution is definitely a significant part of why the club is here today and one of the best in the UK.

David has played for Scotland winning multiple International matches against England prior to 2009, as well as winning Home Nations titles in 2009, 2010 and 2011.
He also played for the Great Britain team winning European Championships 2005 Bronze Medal, as a reserve at the Europeans 2007, as well as a period as an assistant Coach from 2016 to 2018.

Amongst the many games he has won:-