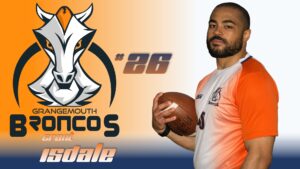 Unfortunately, scheduling and Injury Issues meant Grant had to cut short his time at the Club. Here’s hoping he finds his way back to us in the future.

In 2021 Grant played with the Grangemouth Broncos in the BAFA HNC (Scottish) League.

This will be Grant’s first outing in the Adult Mixed leagues, though he did play with the Broncos Youths in 2007 and 2008.

Since then Grant moved on to Tackle Football. He first played for the Clyde Valley Falcons, then went on to the University of Stirling Clansmen where he won 2 National Championships and was named the BUCS MVP. He has also played for Team Europe and then for the Allgäu Comets (GFL 1).