Inducted into the Grangemouth Flag Football Club Hall of Fame in 2021.

See the Hall of Fame Entry 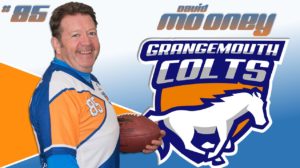 After the 2019 season David announced he would play one more time, but for the Wigan Bandits with his son, David Jnr, which he duly did at Flagging Iron Man 2020. While he remains a supporter of the club, and a non-playing member, the teams will miss his determination and harsh wit.