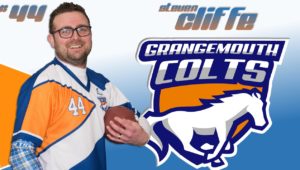 In 2021 Steven will be playing with the Grangemouth Colts in the BAFA HNC (Scottish) League.

In 2018, Steven played a huge role in the success of the Colts team. When QB Broony became unavailable for the Post Season games, Steven volunteered to take on the job. While he found it tough going, he stuck to his task. Hopefully we will see more of him as a receiver in 2019. During the Winter League tournament, Steven took over as the Colts top Scorer.

Steven joined the club in pre-season 2015, having always loved American Football but never finding the chance to get involved due to work and other commitments. When a change in work occurred the decision was made to take up the sport. However, at 33, getting tackled & beaten didn’t seem that appealing so when he discovered a non contact version it was a no brainier to join.

In his first season he set out with one goal – to get some 1st team game time! This became something he got and in doing so impressed the coaches who awarded him with the Kelpie Award for most improved player for the year. In his second year he carried on the same path as a back up in defence getting some good game time. Season 3 took a position change for Steven as he moved from defence to offence taking up a role as back up at centre. He gained his Level 1 Coaching Badge at this stage & took up title of Development Coach for the team. Steven also received a call up to the Scotland Highlanders Squad.