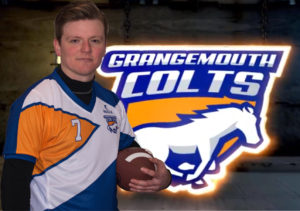 Mark joined the Broncos Seniors in 2016, coming to us after playing for the University of Stirling Clansmen tackle football team. With his tackle football background, Mark quickly became one of the first “go-to” guys when starters were out of the game.

When the Colts team was announced, Mark chose to play with them to get himself the reps to develop his game in order to challenge for a starting spot in the Broncos.

By the time Mark left the Club he was the highest points scorer for the Colts team.