From their creation in June 2019 the Fillies were always aiming to play in the BAFA Women’s League. Unfortunately, it took an extra year for them to get there because of Lockdown. However, it has given them a little more time to get players ready for what lies ahead.

To say the Fillies are a “brand new” team is probably stretching the truth a little.

In September 2019 the Fillies took part in the Carnegie Bowl Charity Tournament. Playing against some “real” Flag teams such as the Colts and Carnegie, and also some scratch teams made up for the tournament. They were helped on the day by a couple of Broncos players (the only two males to play for the Fillies in an organised event so far). They had a ball, even winning their first ever game.

In November they got the opportunity to play three teams in an Opal (BAFA Women’s League’s previous name) event when a team withdrew from the day at Ravenscraig. On that day they played three well established teams, Manchester Titans, Chorley Buccaneers and East Kilbride Pirates. Whie they didn’t win any games, they competed in all three and won many plaudits from their opponents coaches.

In January 2020, at Flagging New Year, the Fillies were in action in the Ladies tournament. They played some of the most experienced teams in the UK and Won one game, tied two and lost four. Only one of the losses was by more than two scores.

The team in 2021 may still have the core of six from the early days, but they are beginning to pick up new players to replace those who have left. 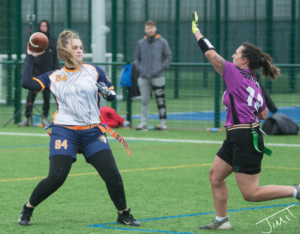 The Harpies too are new to the Women’s Flag scene this year. They do have a core of tackle football players, so are not complete novices.

Both teams showed their nerves early on with multiple turn-overs, with neither able to advance the ball out of their own half. It took until just before the half for the teams got any momentum. The Fillies defence held firm when the Harpies got close to the end zone, despite a refereeing mistake giving the Harpies an extra attempt.  But it was the Fillies who made the break-through. After driving the length of the field, Bethany Thomson passed to Michelle Holburn-White for the team’s first league Touchdown. Fillies up 6 – 0 at the half.

On the second play after the break, Saskia Köttler evaded multiple tacklers as she ran the length of the field to put the Fillies in front 12 – 0. 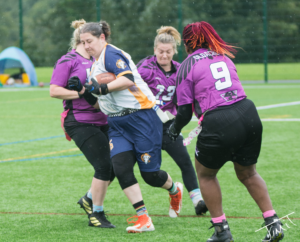 The Harpies though had enough experienced players to keep their heads from dropping and with two quick scores tied up the game. 12 -12.

The game looked like it might end in a tie, but Megan Shelley broke though for a touchdown and an extra point conversion to give Grangemouth a 19 – 12 lead with only seconds to go. The defence held and the Fillies got their first win from their first game of the campaign. 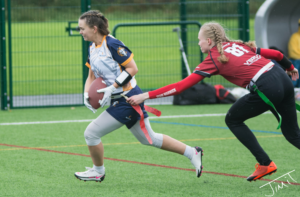 As is the nature of these league fixtures the Fillies went straight into their second game against Warwick Wolverines. They are a well established team, but as a University team the personnel changes on a year by year basis.

This game could not have started better for Grangemouth. Emma Grainger intercepted the Wolverines second pass, setting up the Fillies first score, a pass from Thomson to Shelley. They also combined for the extra point. After stopping Warwick’s second drive, the Thomson to Shelley combination scored again. The XP was missed, but four offensive plays and a 13 – 0 lead.

Warwick were not out of the game yet, with their speedy receiver Carter scoring a TD. 13 – 6.

The Fillies re-established their lead when Köttler scored her second td of the day and Shelley caught the XP. Fillies 20 – Wolverines 6.

When the Fillies extended their lead after half time with another Shelley touchdown, Head Coach Fraser Thomson began to experiment with players in different positions. That almost looked like backfiring when Carter scored another two TDs for Warwick, but the Fillies were still in control and saw the game out comfortably. 26 – 18. 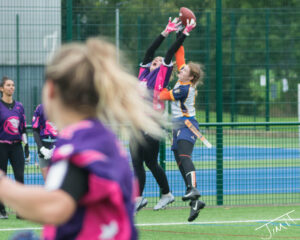 Before the next game started the Fillies knew it was unlikely to be three in a row as they were facing four-time defending champions, Coventry Cougars. The Cougars Women have dominated the league and the team is packed with Great Britain players and squad members.

While the Fillies forced the Cougars on multiple occasions to drive the length of the field, they didn’t manage to force any turnovers in the game. Meanwhile the Fillies offence with their lack of game time experience couldn’t stretch the field enough to make more than minimal gains against such a talented defence.

The 0 – 67 scoreline at the end of the game wasn’t unexpected, if a little higher than might have been hoped. 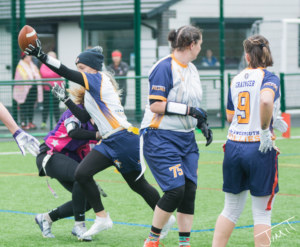 Gemma Gow was unlucky not to record at least one sack, especially against the Cougars, Alison Woods and Katie McGill both shone with their tackling on defence and took their opportunities on offence.

All in all a great performance on their first league outing.