The Club’s ladies team, the Fillies, were in Sheffield on October 30th for their third Women’s Flag Football League Fixture (WFFL)of the 2021 season.
In their first year in the Women’s league the Fillies have exceeded all expectations. The club coaches were confident the ladies’ team would be able to compete in each of the twelve games they would have to play, but could not have predicted they would still have a winning record three-quarters of the way through the season.
In the run-up to the fixture the team knew they had a tough day ahead of them. Each of the three games would last about an hour, plus they had two additional games where they would have to provide help with the refereeing. With at least nine hours on the road, the day was going to be long and hard.

The first opponents were Iceni Spears from Norwich. The Spears have competed in the Women’s league for a few years, but Grangemouth had very little information to give them any ideas for a game-plan. 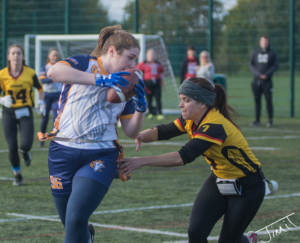 Emma Grainger, who has been a revelation at the Blitzer position, set the tone of the game from the very first play, tackling the runner for a loss. The Fillies defence has been a big feature in the success they are having and in this game it held firm throughout. Katie McGill intercepted on Iceni’s next position and was only a few feet from scoring. In the second half Megan Shelley intercepted a pass and returned it for a touchdown.
Meanwhile, on offence, the Fillies play continues to improve. Bethany Thomson, in her first year at Quarterback is gaining valuable experience. While mistakes do creep into her game, her coaches are quick to point out she has taken on responsibilities that other players don’t want, and is improving with every game she plays.
As well as her pick-6, Shelley scored four touchdowns in the game. Grainger and Saskia Köttler (one of the Colts most experienced Flag players) each scored extra points. Thomson spread the ball around with passes to Michelle Holburn-White (another player with lots of experience in both women’s and mixed Flag), and to ex-tackle players  Lynsey McFadyen, and Gemma Gow who all kept the ball moving. A 20 – 0 lead at half time, then a final result of 32 – 0 was just what the team needed to keep them in with a chance of making it to the WFFL Finals day in December. 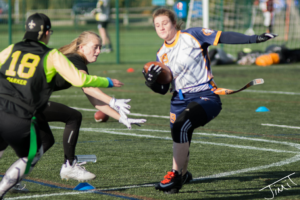 In game two, immediately after their win, they had to reel in their expectations. Hyde Park Renegades were beaten finalists in the European Champions competition just a few weeks ago. A team with a number of GB Lions players in their ranks.
In the first half there were some bright spots for the Fillies, the best being a second interception for McGill, but they were already down 0 – 35 by half time. Into the second half and the Fillies defence began to click. The Renegades high scoring offence was stopped time and again. A sack from Grainger and a last gasp bat down from Shelley helped limit the Renegades to one score in the second half. Given that the Renegades, one of the favourites to take the title, scored 143 points and conceded 0 in their four games on the day, the Fillies second half performance was given some perspective. 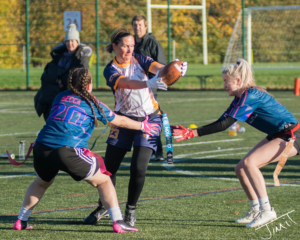 In the third game of the day Grangemouth were up against another top four team. The Cowen Cougars are the younger of the two teams that the Coventry Cougars have in the Women’s league. They are another team with players in, or close to the Great Britain team.
This was another game where the improvements in the Fillies team were apparent. The combination of the speedy Grainger and Gow, as a taller blitzer, kept the Cougar QB guessing.
In the first half the Cougars got two early scores to take the lead, but they were having to work the whole field. The Fillies offence continues to improve. Another Thomson to Shelley touchdown, followed by a Thomson to Grainger extra point cut the deficit, but the Cougars scored again to make the half time score 7 – 22.
In the second half, the Fillies defence continued to frustrate the normally efficient Cowen offence. The Cougars experience showed though as they still managed to find the end-zone. When the Fillies had the ball they were driving up the field, but only made it into the end-zone once with a pass to Holburn-White. As time was running out the coaches asked Thomson to put a high ball into the end-zone but unfortunately it was the Cougars who benefitted with a pick six to inflate their score just a little. Fillies lose 48 to 13.

In the end, the results were as expected, but for periods of the two losses the Fillies showed promise for the future.

The Fillies will play their last three games of the season (possibly in Clitheroe) on the 13th of November. There are now five teams likely to be in contention for the last four places at Finals Day. The Fillies are one of those teams and their games will be against three of the others, Sheffield Giants, Leeds Samurai and Manchester Titans.