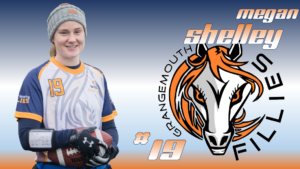 Teams played for: Grangemouth Broncos/Colts and Dunfermline Kings
Fun Fact: Megan used to sing when she was younger, which included singing at her cousins wedding

Megan has been around the club for a few years, supporting both the Broncos and the Colts. She has followed the Broncos team in particular, travelling to away matches all over Scotland and England. In addition she travelled with the team when they were competing in the 2018 and 2019 Big Bowl tournaments in Germany.