Grangemouth Fillies Ladies Flag Football team travelled to Preston knowing they still had a chance to be one of the top eight teams to secure a place at the UK-wide Women’s Flag Football League Finals Day. As a brand new team, with only four players with more than a handful of games behind them their aim had been to complete the season with a few wins under their belts and to have competed well with some of the top name teams. To be in eighth place in the league going into last weekend’s set of three games was more than could have been anticipated.
As the league stood there were five teams still looking to secure the last four spots at Finals Day. The Fillies and Chorley Buccaneers, who had fought out a 0 – 0 draw, and Grangemouth’s three opponents on the day, Leeds Samurai, Manchester Titans and Sheffield Giants. All well established teams. The Fillies needed to win two games to be sure of qualification, one win would leave them depending on other results. 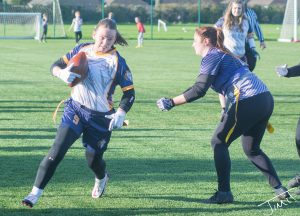 In their first game, against Leeds Samurai, it looked like the game might be a shoot-out. Leeds scored on their first possession as did the Fillies through current top scorer Megan Shelley. Leeds scored on their second possession. Then events took a turn for the worse. Fillies QB Bethany Thomson threw an interception which led to a Leeds score, leaving Grangemouth trailing 6 – 20. When Thomson threw a second interception Leeds could have effectively ended the game, but the Fillies defence held. As a rookie quarterback two interceptions in quick succession could have caused Thomson to take easier options, but she stuck to the game plan. It paid off when she passed to Michelle Holburn-White to make the score 12 – 20, then another defensive stop gave them the ball which they drove up the field and Shelley found the end-zone again. The Fillies had dug themselves out of a deep hole and were only two points behind at the half and would start the second half with the ball.
In the second half both teams stepped up on defence. Shelley caught two interceptions to help stop any further Leeds scores, but Thomson was still doing what good quarterbacks do – forget the past, focus on winning the game. The Fillies were still still driving up the field and at one point thought they had a go-ahead score, but it was chalked off for a penalty. However, Shelley’s second interception gave the Fillies a short field and Thomson passed to Saskia Köttler for a touchdown to take the lead. Leeds did have time to respond but Emma Grainger sacked the Leeds quarterback to pile on the pressure and they failed to score. That allowed the Fillies to play conservatively and run out the clock for that all-important win.

Grangemouth then went straight into their next game against Sheffield Giants. The Giants are a much better team than some of their results have implied this year, but the Fillies were still optimistic about their chances. The optimism didn’t last long as the Giants had obviously brought their “A” game with them. With four current and past Great Britain internationalists all fit and in the Giants team the Fillies found the going tough. While they were managing to move the ball, they rarely threatened the Giants’ end-zone. Meanwhile Sheffield were, on all but one occasion, scoring while they had the ball. The highlight of the first half was an interception by Shelley but that was about all the Fillies had to show for their efforts. The Giants had a half time lead 32 – 0 and extended that to 46 – 0 by full time. 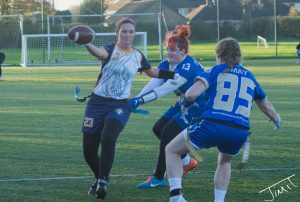 The Fillies then had a break to rest and gather their thoughts before their next game, which would be against another team with years more experience, Manchester Titans.
As the game started the Grangemouth defence was still working well and stopped the Titans first possession. On offence though the Fillies were still struggling to find the end-zone, which added to the pressure on the defence. Manchester had too much experience to be denied for long and scored on their next two possessions. The Fillies came close near the end of the half, but it was the Titans who completed the scoring with a last minute TD to lead 19 – 0 at the half.
In the second half the Fillies failed with their first drive, but also stopped the Titans. On their subsequent possession the Fillies offence clicked and they capped off a good drive with a TD for Emma Grainger. This cheered the Grangemouth Supporters on the sideline, but only momentarily. The Titans seemed to change gear and scored three quick touchdowns to leave the Fillies trailing 38 – 6. Grangemouth’s enthusiasm for their first season in the league has been fantastic throughout the four hard game days they have faced, so it seemed only fitting that they got the final say with a late touchdown from Megan Shelley. Final score – Grangemouth Fillies 12, Manchester Titans 38.
That meant the Fillies would rely on the outcome of the final game of the day, Manchester Titans v Leeds Samurai. The score swung both ways as the game progressed with neither team able to pull away from the other. If either team had won, the Fillies would make Finals day. The 26 – 26 tie was the worst possible result for Grangemouth. That left four teams tied for three places, all with identical records against the other three. The outcome of the complicated situation came down to points conceded in all the league games. Although the Fillies have scored more points than two of the other teams, they have conceded most so dropped down to 9th place and out of Finals Day qualification.
While the team were disappointed to miss out on Finals Day by such a narrow margin, the Fillies have enjoyed their rollercoaster first season in the league. They have won tight games and they have shown they are as good as some of the established teams, proving the decision to join this year was justified. They have also lost heavily to the top three teams, showing they still have a way to go. But with the whole Grangemouth Flag Football Club behind them they are already looking to build on a solid foundation.