In the second week of this year’s BAFA HNC League the Aberdeen Oilcats took the honours in the 36th recorded meeting with Grangemouth Broncos. 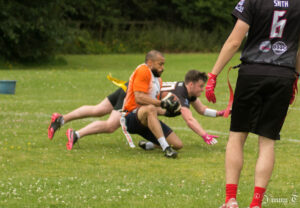 The Broncos started well on offence, scoring on their first two drives, but their defence conceded on each of the Oilcats’ responses. The Broncos were ahead thanks to scoring their two extra point conversions while Aberdeen didn’t. 14 – 12. Then the offence seemed to get a bit over-ambitious and it backfired, failing to score. The Oilcats got their noses in front on their next possession and from then on the Broncos were always playing catch-up. As the game progressed into the second half, the Broncos just didn’t seem to be clicking on either side of the ball. In the end a disappointing 39 – 28 loss. Even more disappointing because there is no opportunity to respond in a return fixture this shortened season.

Scott McKenzie threw three TDs, two XPs, a 2XP and ran in a TD himself. His receivers were – Kevin Woods (2 TDs), Matthew Ross (1TD and 1 XP) and Grant Isdale (2XPs).

Defensively, Joe Mcilwaine caught an interception on an Oilcat XP and Sarah Wakelin got her first sack of the day. 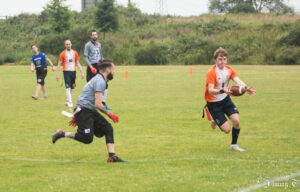 In the next match the Broncos had recovered from their earlier disappointment and were back to their usual relaxed selves as they cruised past the Aberdeen Silvercats.

McKenzie threw six TDs and three XPs. Isdale threw for an XP, and Fraser Thomson and Callum Woods got in a little QB action too.

On Defence the Broncos had the measure of the Silvercats. Two pick-sixes from Kevin Woods and an interception for Liam Fleming were features, but the performance of the day had to be Sarah Wakelin with FIVE Sacks and Two Tackles-For-Loss. That has to be a club record in a single game.

Luke Morrice, veteran Jimmy Thomson, Calum Young and Megan Shelley (making her first start for the Broncos) were also in on the action.

In the other games played at the fixture the Oilcats over came the Edinburgh Outlaws 33 – 13 and the Outlaws beat the Silvercats 45 – 0.

Next Grangemouth fixtures will be, Colts hosting the two Aberdeen teams at Grangemouth Rugby Club on Saturday 17th of July, while Broncos will be playing the Dunfermline Kings and Edinburgh Outlaws on Sunday 18th July at Dunfermline,.