The Broncos 2018 Annual Review and Awards Night was once again held at the Oxgang Kitchen, Bar and Rooms. On Friday 12th October the Club’s players got together with family, friends and supporters to celebrate another successful year of Flag Football.

Club Chairman, Jimmy Thomson, delivered a review of the past year, featuring some of the Highs and Lows for both the Broncos and our new Colts team.

After the review came the presentation of the 2018 Awards.

Comedy Award 2018 (nominated by the players, voted on by the committee) 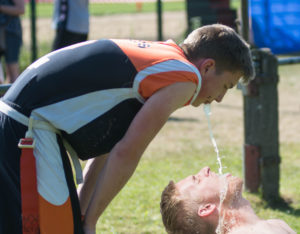 While there were a few comical moments throughout the year, the Comedy Award was presented to Jimmy Thomson for a photo combination of two incidents at Big Bowl.

Kelpie Award 2018 (Chosen by the Broncos Committee members)
There were nominations for Andy Brown and Graham Wilson, but the Club decided to award two Kelpie Awards:- 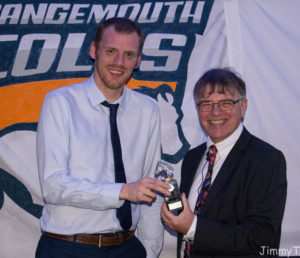 The first was to Kristopher Walker. He turned up at the club before the start of the season and immediately injured himself. That usually means we never see a player again.
However, he got himself fit and came back. He wasn’t quite ready to play yet, but he came to the Colts game days where he helped with the video and as waterboy. At our home fixtures he helped with the set out of the field and with the packing away, not just for the Colts, but for the Broncos too. He did a lot more work around the club than some of the established players. 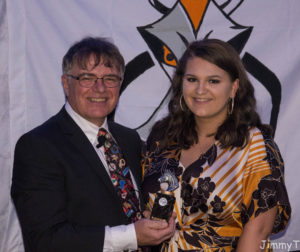 The second Kelpie Award went to a new member of the club who isn’t likely to appear in any of the stats. Someone who has been at almost all of the club games this year. Both Broncos and Colts, league, tournaments and friendlies. All over the country, and only work stopped her from travelling to Germany. This person has helped out on the sideline with video and photography, taking stats, fetching and carrying. She has joined in at practices when required even though she currently has no intention of playing. Her enthusiasm for the club is such that she has brought friends along to our games and nights out.

Winner of our second Kelpie Award in 2018 is Bethany Thomson.

Andy only missed one offensive play in all 10 regular season games.
As a rookie quarterback, he passed for 26 of the team’s 32 touchdowns and ran in four himself. Including the 19 extra point conversions, he passed for 175 of the team total 205 points.
He attempted 358 passes, completing almost 60%.

There were three nominations for Colts Defensive Player of the Year for 2018 – Arnold Masayila, Mark Wallace and Andy Brown.
And the winner…

Mark played absolutely every defensive down in the ten regular season games.
He had the third highest number of tackles.
Mark may have been the safety that opposing quarterbacks should have been avoiding, but he still had the team highest total of passes defended. 12 tips and 5 interceptions.
He was so close on a number of occasions to taking the interceptions back for a TD

At this point, there was a Team Presentation made. 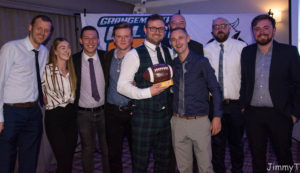 When it became apparent that the team wouldn’t have a quarterback for the post season games, Steven Cliffe stepped forward (or did the rest of the team step back). Regardless, Steven then spent the next couple of months trying to learn the QB position. While everyone thinks they can be the quarterback, as Steven found out, once you are into competitive games, it isn’t as easy as some people make it look. In appreciation of his efforts the Colts team presented him with a game ball signed by his team-mates.

There were three nominations for Broncos Offensive Player of the Year for 2018 – Matthew Ross, Callum Woods and Scott McKenzie
And the winner…

Callum played in all but two regular season games.
He was the top scorer for the team on offence, with 15 TDs and 7 XPs. That’s 97 points. He also passed the ball for two TDs and an XP.
He was the receiver most targeted by a long way and caught 61% of the passes.

There were three nominations for Broncos Offensive Player of the Year – Liam Fleming , Fraser Thomson and Callum Woods.
And the winner…

Liam played 9 of the fourteen regular season games.
He had the highest number of passes defended, including the most tipped passes (8) and the most interceptions (also 8). He is one of the three people to return an interception for a touchdown.

The Performance Award is a discretionary award for occasions where the Club Coaches and Committee decide that there has been an outstanding performance that merits recognition, but the both the Offensive and Defensive MVP awards have already been given.

Matty was actually on the park most overall.
On offence he was the second highest points scorer, the second most targeted receiver, with the second best completion percentage.
On defence he had the third highest total number of tackles. That included four sacks or tackles for loss.

There were four people nominated for the Colts Players’ Player of the Year – Andy Brown, Gordon McSherry, Mark Wallace and Steven Cliffe.
And the Winner…

There were five people nominated for the Broncos Players’ Player of the Year – Callum Woods, Fraser Thomson, Liam Fleming, Matthew Ross and Scott McKenzie.
And the Winner…