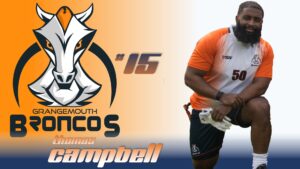 In 2021 Thomas played with the Grangemouth Broncos in the BAFA HNC (Scottish) League.

Due to COVID restrictions the competition was a flat structure within each of the four UK regions. That meant the Broncos and Colts were in the same league for the first time.

Unfortunately TC’s schedule and the Broncos schedule never seemed to tie up. Hopefully it will again in the future.