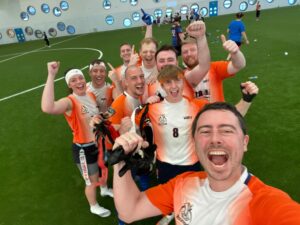 The Broncos were the winners of the Granite City Quaich in 2019 on a rain-soaked muddy day in September in Aberdeen. So when the 2020 tournament was set up for the indoor venue at Aberdeen Sports Village the Broncos immediately signed up. Then, because of Lockdown the event was postponed until September 2021.
In the run-up to the event it seemed like all teams, including the Broncos, were struggling to fill their squads. However, when we finally got the players to commit to travelling we ended up with a stronger team than was anticipate.
This year’s event was a two day tournament, with a round robin of games played over the first day and a half, followed by play-offs for the top four and for the lower places. Eleven games in total.
On day one, the Broncos schedule looked reasonably favourable. Two Div 1 teams to start with before getting into some meatier opposition.
Game one was against the West Lothian Chargers. Having beaten them the month before in the league, the Broncos were confident. But the Chargers are improving, so no room for complacency. The Broncos were too strong for them. Even in the shorter games in the tournament they managed a comfortable 34 – 6 win.
Next were the Aberdeen Silvercats who finished below the Colts in the League. But once again the Broncos prevailed. 43 – 12. Seemed like they were warming to the task.
Chichester Sharks had travelled a long way to be in the tournament, but the Broncos were not going to go easy on them. Another clear win. 24 – 7.
In the league the Broncos had been pushed hard by the Dunfermline Kings before puling away in the end. So they were quite relieved to see that one of their threats, Brandon Lamb, was laying for another team. Still the games were getting tighter, but another victory. 27 – 13
Next challenge, Flagging Ball Z, a tournament specialist team (including Brandon Lamb). But a 20 – 12 win was a good result.
The final game of the day was against Edinburgh Outlaws. Knowing how close the game had been in the league (one point win) the Broncos needed to be on top form. The were, or at least in the best form they could be after 5 games. A 19 – 13 win was good news for those waiting for news at home. 6 and 0 at the end of day one.
Into day two and the aches and pains from the previous day’s play needed to be forgotten. Especially when the first game was Aberdeen’s tournament team Hitches Be Crazy. But as with the previous day the Broncos were up for it. A 20 – 7 win proved that.
Focus had to be maintained into the next game against Rexy’s Midnight Runners. They are a tournament team which can call on players from all over Scotland, so are guaranteed to be full of talent. Thankfully, so are the Broncos. Another win, 25 – 8.
One more game to go, against the newest team in Scotland, Moray Distillers. The Broncos showed the difference in the experience level with a 32 – 0 win.
Unbeaten in the round robin, the Broncos were the top seeds in the Championship bracket, so would play the fourth seeds, Edinburgh Outlaws. This was another close game between the two old “enemies”. But, the Broncos had the upper hand and moved to the final with a 14 – 6 win.
In the final, the Broncos met Rexy’s for a thrilling final.
The Broncos eventually came out on top by a single point. 21 – 20.
Repeat Champions. 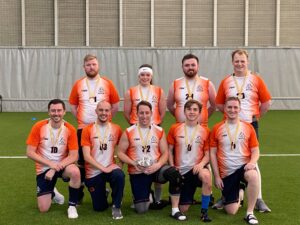