In 2019 the Club had two teams playing in the BAFA Leagues.

The Grangemouth Broncos played in the BAFA HNC Premier North Conference, in the HNC League. 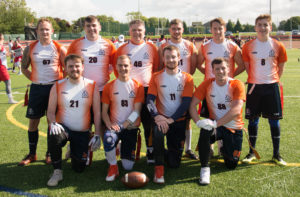 The 2019 Broncos were HNC Premier Champions, with a 14 – 1 – 0 record. They were Number 1 seeds from the North Conference at British Finals, where they lost out on making the final (to the eventual Champions, Cardiff Hurricanes) by just one point.

In the end, they came fourth in the UK, losing to the outgoing Champions (Baker Street Buttonhookers) in a 3rd/4th game that saw 119 points on the scoreboard.