Last weekend Grangemouth Fillies Ladies team were involved in the first Scottish derby in the Women’s Flag Football League when they played the East Kilbride Pirates at Ravenscraig Regional Sports Centre in Motherwell. In the tournament style league fixture they also took on Chorley Buccaneers and Nottingham Gold.
Last weekend’s fixture was played on the indoor pitch and also included Manchester Titans, Sheffield Giants and Leeds Samurai. There were ten games played on the day, with two Flag Football pitches fitting on the football field, five sets of two games each taking an hour to play.
The Fillies team were created in 2019 as part of the Grangemouth Flag Football Club but are still considered a new team since 2020 was almost entirely a washout because of Lockdown. The Pirates Ladies are also part of a larger East Kilbride organization. They have been competing in the league for five years. Given they are the only two teams in Scotland they know each other well, as do the coaching staff. 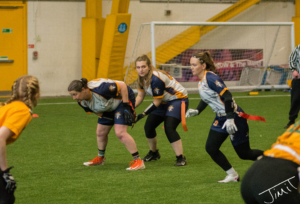 Meeting in the first game of the day the Pirates were the favourites to take the tie, the question was more about what the score difference would be. With the Fillies coming up short in their first possession and the Pirates scoring on theirs it looked like the predictions might be right. But, as was proved last game day, the Fillies shouldn’t be underestimated. On their next drive Bethany Thomson passed to Megan Shelly who evaded tackles to score for the Fillies. With the missed extra point the fillies were only behind by one point. Both defences then stepped up a gear. It took the Pirates to the last play of the half to find the end-zone again. The second half went a little more to form as the Pirates scored on three of their four possessions. However, they had to work hard for every score. Meanwhile, the Fillies were moving the ball well, but just couldn’t punch it in. One thing the Pirates had not game-planned for was Emma Grainger. Coach Thomson decided to use her speed as a Blitzer and she proved her worth. Constantly pressuring Pirates QB Barclay (a GB squad player). She forced Barclay to dump the ball four times, sacked her once, tackled her for a loss on an option play and scored the Fillies only points of the second half with a Safety.
While the result was as predicted, the score-line proved that the Fillies deserve the praise they are getting from around the league. Pirates 32 – Fillies 8. 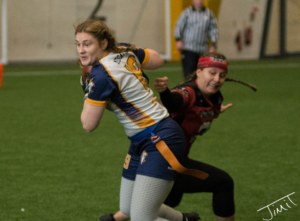 The Fillies went straight into their next game against Chorley Buccaneers. The Buccaneers are another well established organization and have been in the Women’s Flag League for as long as it has been running. Having seen Grangemouth’s performances so far in the league, this was predicted to be a tight game.
The Fillies defence were, in the words of their coach, outstanding. The phrase “bend but don’t break” was very apt. Chorley’s offence could get to within feet of the Grangemouth end-zone, but the Fillies held firm. On the other hand the Buccaneers defence seemed to have the measure of the Fillies offence. The Fillies kept their best offensive drive to the end of the game. They got to within a few yards of the end-zone, with fourth and goal to go and seconds on the clock, there was a crucial failure in the communication between the officials and the Grangemouth coaches which allowed the clock to run out. A very rare 0 – 0 draw.
While the Grangemouth Staff were left stunned and disappointed, the players were pleased (as they should be) with a tie against a much more experienced team.
Grangemouth then had a break before their next game. University teams have been a feature of the Women’s league since the outset. But whole they are ever present, their squads change from year to year and the level of experience will vary. Nottingham Gold were the next Fillies’ opponents. They had a young squad, but had been well drilled and knew their offensive playbook well.
Grangemouth scored on the first possession of the game to calm any remaining nerves. Touchdown to Shelley and Extra Point to Grainger. Mostly. On Nottingham’s first possession Alison Woods intercepted a pass and with what she must have thought was the encouragement of the sideline she ran into the end-zone. Then she realized the shouts were that she was going the wrong way and conceded a safety. Two points to Nottingham. Fillies 7 – Gold 2.
The Fillies were next to score when Saskia Köttler caught a pass from Thomson and ran for the end-zone. Gemma Gow scored the XP.

Woods then redeemed herself. A second interception, this time running the right way for a TD to bring a huge cheer from the sideline. Grainger again with the XP. Grainger then got her own TD, but the XP was caught short of the end-zone. Fillies 27 – Gold 2.
It seemed that having gone so far behind Nottingham’s offence relaxed and decided to go for broke. They were rewarded with a TD plus XP.
Grainger scored a second TD to end the half with Grangemouth comfortably in the lead 33 – 9. 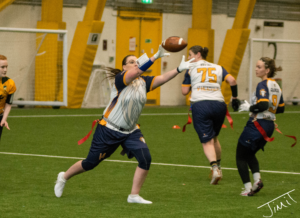 The second half went mostly to plan for the Fillies. Lynsey McFadyen returning to the team after work commitments had kept her out for a while. She marked the occasion with two TDs. Shelley added an XP.
The only blip on the performance was a Nottingham interception returned for a TD, and they scored as time expired. Final score, Grangemouth Fillies 46 – Nottingham Gold 23.
The Fillies now sit mid-table at the half way stage of the season.
Coach Fraser Thomson was full of praise for his team. “The coaches believed we would win games in the league. We also knew that we could push some of the established teams. We were also realistic enough to know there are very talented teams we will struggle against. Now the girls are beginning to see they are by no means out of their depth. To be fair, we still have a lot to do if we want to play in the post season, but our offence improves with every game and our defence is already working well. The more experience we get, the better we will become.”
The Fillies next travel to Sheffield on 30th October where they will play Iceni Spears, Hyde Park Renegades and Cowen Cougars. The Renegades and Cougars will be tough matches to get anything from.
Any females aged 16 and over who would like to try Flag Football can come along and join in at one of our Monday Night sessions at Braes High School (18:30 until 20:15), or contact Grangemouth Flag Football Club on Facebook.