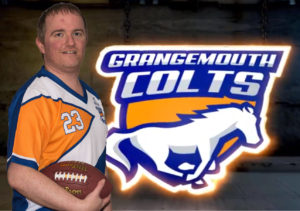 After the 2018 season playing with the Grangemouth Colts in the BAFA Division 1 HNC Conference, Graham has decided to hang up his Flags.

Graham first appeared at club training in 2014 when he managed a couple of game days, but has only recently returned to the club. Graham volunteered to learn the quarterback position to provide a little depth at that difficult position. While he played a few games with periods at QB, he was most effective as a receiver from the centre position. He was sooo close to scoring on many occasions, but his efforts set up the scores for other people.