On the 28th of September the Broncos traveled to Aberdeen for what was likely their last competition of 2019.
Aberdeen Oilcats first ran their Granite City Quaich tournament back in 2016, indoors at the Sports Village. The Broncos on that occasion were runners up to the Glasgow Hornets.
In this second edition of the tournament, there were nine teams entered. It is possible that some entered assuming the tournament would be indoors again. It wasn’t.
As the teams gathered for the tournament, the rain had already been falling steadily, but luckily at this point everyone was keen to get on with it.
In their first game, the Broncos were playing the Edinburgh Outlaws. It seems that everywhere the Broncos and Outlaws have been this year, they faced off in the first game of the day. So far the Broncos have prevailed. 27 – 6 on this occasion.
In the second game, the West Lothian Chargers were the opposition. As top of the HNC Premier the Broncos shouldn’t have much difficulty against the bottom team in the HNC Div 1. But the weather can be a great leveller. Even though the Broncos scored only the three TDs in this game, the Defence were up to the task. 20 – 0
The third game on paper should have been a more difficult prospect. Top Gun are a tournament team who can call on players from all over. Unfortunately, they turned up in Aberdeen short handed, so couldn’t match the Broncos on the day. 25 – 0.
Next up was a brand new team, the Moray Distillers. As you might expect, they had a lot of enthusiasm, but lacked the experience to trouble Grangemouth. 26 – 0.
Then it was time for a lunch break. Having toiled through the rain all morning, there were some who were worried that the teams may opt to just end the day there. Thankfully, all emerged after the break.
With some of their “easier” games behind them, the Broncos were now facing a more difficult set of games.
The first of the afternoon games was against “Hitches Be Crazy”. A team made up of past and present Oilcats players. No lack of experience there. But the Broncos were up to the task. 25 – 6.
Rexy’s Midnight Runners, an invitational tournament team, have beaten the Broncos in the past. If they could do that in this next match, they could force the tournament organisers to run the scheduled final. Despite the weather not improving at all. However, the Broncos were on a roll. Another victory 24 – 6.
Carnegie were another stumbling potential stumbling block. But a couple of their “Fair Weather” players had deserted them at the lunch break. That put a little too much pressure on the smaller squad, and the Broncos just kept rolling on. 27 – 7.
The final match of the day featured two unbeaten teams. The Broncos had won all of their games, but the Silvercats had had two ties. Rather than go through all the permutations of what a Silvercats win would mean, the players just got on with the game, and the result took care of it all. A 26 – 7 Broncos win.
Even the second placed Rexy’s team agreed that the need for the scheduled final would only delay getting into the warm and dry changing rooms. 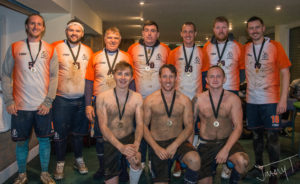 So the Broncos emerged victorious on the day. Scoring 200 points and conceding 32.
The Broncos would like to thank Aberdeen for hosting the tournament. They would also like to thank all of the opposing teams for some great games, played in the best spirit, despite the steady downpour.

The Broncos squad on the day was:-

Craig Dempsey, James Duffie, Euan MacLean, Scott McKenzie, Ally Mundie, Matthew Ross, Fraser Thomson, Jimmy Thomson, Callum Woods and Kevin Woods. Unfortunately, the weather made it impossible to gather much in the way of stats. Suffice to say that everyone played their part.