Grangemouth Broncos and Colts Flag Football teams were in Manchester on the 17th/18th of August for the British American Football Association (BAFA) Flag Finals and Plate competitions.
On Saturday the Broncos were in the knock-out stages of the BAFA Premier British Championships. They have made it to the last 8 on a few occasions in the past, but have never progressed. This year, they had secured the number two seed overall and were tipped by some for the final.
In their first match of the day they played the Northants Titans. The Broncos as top seeds from the North were playing the number four seeds from the south, so a lot was expected. 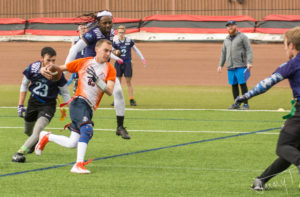 They duly delivered. Matthew Ross set the tone with three sacks on the Titans QB in their first drive with the ball. With the calibre of the Broncos Defence it was no surprise Ross was so effective. As the first half progressed Ross got a fourth sack and the Broncos made three interceptions, one each for Liam Fleming, Luke Morrice and Callum Woods. Northants did score, but not until they were already three scores behind.
In return, the Broncos offence scored every time they had the ball. Touchdowns from Woods(2), Scott McKenzie and Morrice, plus extra points from Ross and Jimmy Thomson gave the Broncos a 26 points to 6 half time lead.
Into the second half and coach Fraser Thomson took the opportunity to mix things up a little both on offence and on defence.
The Defence did concede one more touchdown, but the offence continued to put points on the board. Two TDs from Ross and an extra point from Ally Mundie. 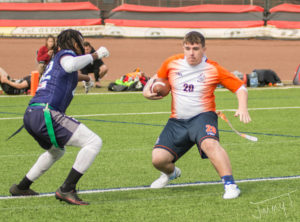 Coach Thomson then decided it was time for his own first action in 15 months after surgery on a torn achilles tendon. After a few carries with the ball he then scored a touchdown to mark his comeback.
A comprehensive 45 – 12 win for the Broncos put them into the semi-final.
Prior to the competition, the Glasgow Hornets were downplaying their chances of making it to the semis, but many people believed they were trying to deflect some of the pressure. Few people expected the Cardiff Hurricanes to progress, but progress they did, with a 26 – 19 win.
The Broncos had never faced Cardiff before, but knew who their danger men were, GB Lions players Joe Cotterill (Gold) and Kostas Karras (Silver). 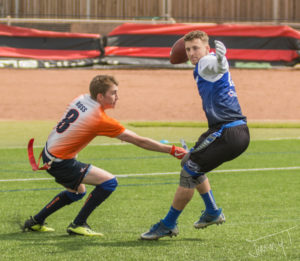 In the early stages of the game there was little to separate the two teams. McKenzie, Woods and Ross scored TDs, while Mundie got an XP. At the half Cardiff led 26 to 19, but the Broncos had the ball first in the second half. When Grangemouth failed to score, Cardiff extended their lead, 19 – 33, and it looked like the Broncos were heading out. One feature of the Broncos this year is that they have not panicked any time they have gone behind. Woods got a TD and Mundie an XP to narrow the gap, but Cardiff scored again. Ross scored a TD to bring Grangemouth back into it, then the Defence made a huge effort and stopped the Hurricanes. 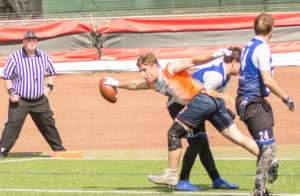 When Woods then scored his third TD of the game, the Broncos had the chance to tie the match with the extra point attempt. A big play from the Cardiff defence stopped the play and the Broncos were behind 38 – 39, with time running out. Cardiff duly ran the clock out ending the Broncos chance of making the final.

That meant the Broncos were playing their third game for third place rather than the Championship. In the other semi-final London Smoke surprised everyone by beating the champions for the past two years, the Baker Street Buttonhookers. So the third/fourth match ended up as the game many had predicted for the final.
The ‘Hookers have dominated the southern divisions over the past three years. With five GB Gold/Silver players, including the quarterback, Vince Macchi, the Broncos knew their final match would be the toughest yet.

With five changes of lead in the first half, the Broncos were giving as good as they got. A 26 – 26 tie at half time was a fair reflection of the game. In the second half Grangemouth kept pace with the London team until disaster struck. The Hookers had got a TD ahead when McKenzie threw a rare interception, which was returned for a TD (only the second “Pick 6” all season).
From then on the Broncos had to start taking chances. While they did continue to score, so did the ‘Hookers. 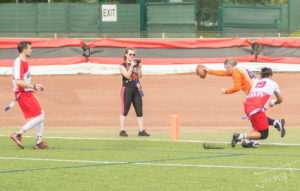 The final score of 51 – 68 may seem disappointing, but only one team has scored more than half the Broncos total against Baker Street in the past year.
Callum Woods scored six TDs and two XPs. Ally Mundie 1 TD, Matty Ross 1 XP, and veteran Jimmy Thomson, proving that age is no barrier, scored a TD at the age of 61.
At the end of a tough day, Coach Fraser Thomson was full of praise for all of his players. “No-one could have asked for any more from any of them.”