On the 29th and 30th of June, Grangemouth Flag Football Club had both teams in action, both trying to make the British Finals.
On Saturday, the Colts team were in Renfrew playing three of their Division 1 rivals, with an outside chance of pinching the second spot from the Midlothian Sabers. But that would mean the Colts winning all of their games in Renfrew this week, and in Livingston in two weeks, plus other results going their way.
In their first game the Colts were up against the Glasgow Killer Bees. The Bees currently sit on top of the BAFA Div 1 HNC table, and were undefeated. So not the easiest of starts. 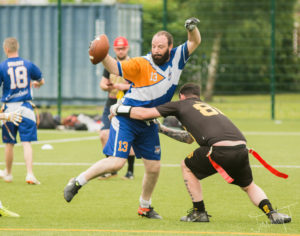 As has happened in the past, the Colts were first to score with a pass from Brown to McSherry. 6 – 0. But Glasgow have had so many come from behind victories this year it is almost expected. So, when the Killer Bees scored and converted to take a one point lead, the Colts could have lost concentration. But this time they held their nerve. A second from McSherry got Grangemouth ahead and the half ended with the Colts in front 12 – 7.
In the second half the defences were dominant until Steven Cliffe got away from a defender to score a Touchdown, and then add the conversion. A 19 – 7 lead that the Colts kept to the final whistle. Two Sacks from Walker, and interceptions from Hutchison and Brown maintained the pressure on the Bees offence.
In their second game the Colts faced their hosts for the day, the Renfrewshire Raptors. These games are generally very tight. This was no exception. In the first half, the Raptors were first on the scoreboard with a converted TD, but Steven Cliffe got a TD (with no extra point) to cut the deficit. 6 – 7. The Raptors pulled away again with a second converted TD. Then, in the last play of the first half Duffie scored a TD and the Colts opted for the more difficult 2 point conversion. The pass from Brown to Walker was inch perfect. 14 – 14 at the break. 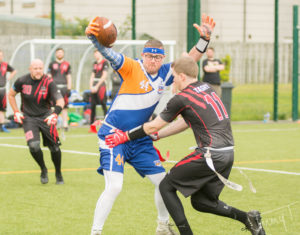 In the second half, McSherry caught both the TD and the extra point to give the Colts the lead, but the Raptors came back and scored seven points themselves. 21 points each. The Colts nerve held again and with another TD and XP from McSherry, the Colts got their second win of the day. 28 – 21. 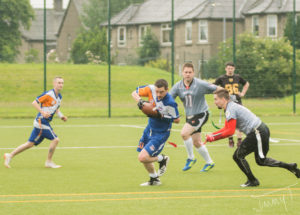 In their final game of the day the Colts played Aberdeen Silvercats. True to form, when the game started, so did the rain. The weather really did spoil the game with dropped passes and missed tackles. Neither team was playing well. The Colts got the only score of the first half through another McSherry TD. The Silvercats got the only score of the second half. Crucially, they got their extra point for a 7 – 6 lead.

With Thunder and lightning in the air, the game fizzled out and the Colts had to be content with two wins out of three.
That put them out of contention for second place in the league and a return to Div 1 British Finals. The loss also may have cost them a chance to play in the Div 1 Plate competition.