The Broncos were in action at Carnegie on Sunday 30th June. They went into the day unbeaten and on top of the Premier HNC League. Three wins from three games would confirm them as HNC Champions, but there were three teams who all had their own targets on the day.
The first game of the day was against the Glasgow Hornets. They are the main threat to the Broncos title hopes, but when the Broncos beat them in April, that was the first regular season defeat for the Hornets in two years. They would be out for revenge. 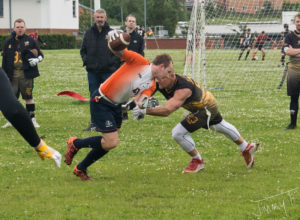 The Broncos this season have prided themselves on starting fast in every game. Sunday was anything but a fast start. The Grangemouth team seemed flat, with little spark or enthusiasm. Maybe it was complacency or nerves, or it could have been they were too worried about losing their unbeaten status. In any event, they were behind 12 – 0 very quickly and 18 – 0 at the half. Coach Thomson was almost speechless with frustration, trying to rally the team.
In the second half the Broncos did improve, but still were not the team they have been all season. Even a TD pass from McKenzie to Ross failed to gain any momentum. As time ran out the Hornets scored a late TD to add further injury to the scoreline. A 6 – 25 loss, and their perfect record smashed.

From that disappointing defeat, the team were straight into their next game against the Edinburgh Outlaws. The Outlaws have had an up and down season, and are having to fight for Premier League survival, so were going to be no pushovers despite the Broncos 39 – 6 win earlier in the year.
The first half of this game didn’t see any pick up in the Broncos form. They did manage to stop the Outlaws from scoring but couldn’t move the ball effectively themselves. A Touchdown from Mundie was all the Broncos had at the half and that had been cancelled out by a score from Edinburgh’s Morello.
Into the second half, and the Broncos finally seemed to be waking up. They contained the Outlaws offence to only a couple of first downs, and began to accumulate scores themselves. Two more TDs and an XP from Mundie, plus a TD and XP from Woods finally gave the Broncos a comfortable 26 -6 win.

The final game of the day was against the up-and-coming Carnegie Flag. After being promoted from Div 1 last year, they took a while to find their feet in the Premier, but now have a few good wins under their belts. Including a win over Aberdeen Oilcats earlier in the day.
While the Broncos were still not firing on all cylinders, they had improved from their sluggish start, but with the win against the Oilcats, Carnegie were on a roll. In a tit for tat first half, Lamb and Nicholl combined to give Carnegie a 19 – 18 lead at the half, while Ross and Mundie had scored Broncos TDs from McKenzie passes, and Morrice had run back an interception for a score.
Finally, in the second half of the third game of the day the Broncos began to look like themselves. A second TD from Ross, plus two TDs and an XP from Woods gave the Broncos a 37 – 19 win.

While the windy weather played it’s part in the failings of the Broncos on the day, the other teams also had to cope with it. They have to pick themselves up from a day where they played poorly, but still managed two wins out of three.

With those two wins, the Broncos have guaranteed themselves a place in the British Premier Finals (Top eight teams in the country), but have to win one of their last two games at home on the 21st of July to take the HNC League title. This is their first time the Broncos have made an appearance at the National Finals day, having fallen at the Regional Finals on three previous occasions. At National Finals, the opposition will not allow them to work their way into games. They have to play better or it is going to be a short day in Manchester in August.