The day after the Broncos played in Manchester the Colts were playing their one home fixture. This year, for the first time at Grangemouth Rugby Club.

With the need to use two pitches to run the games more efficiently, Whitecross is just not big enough, so the club have arranged for the home fixtures to be played at Rugby Club.

The Colts hosted all the other five BAFA Div 1 HNC teams, with six games on the day’s programme. 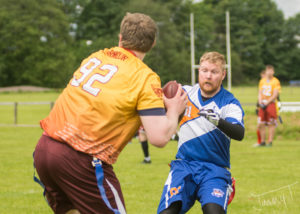 The Colts were first in action against the Midlothian Sabers. With Glasgow unbeaten at the top of the table, the Sabers are currently the team to beat for second place and a place in the post-season.
In the early exchanges the Colts gave as good as they got, but as in the previous match-up this year, the Sabers unsophisticated but effective long pass was the Colts undoing. While the Colts defence were tride for stride with their opposite numbers, they just couldn’t stop them from catching the ball. By half time they were down 6 – 26. After the break, the Colts defence still struggled with the Sabers offence, but the home offence were more able to move the ball. While the Colts held their own in the second half, the deficit was too much to overcome, so a disappointing 19 – 39 loss. 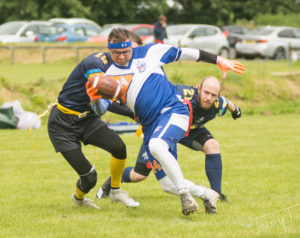 In the second game of the day the Colts played the winless Chargers. Games between these two teams always seem to be tight, but with the Chargers missing two of their better players, Grangemouth had to take the opportunity to put some points on the board.

The Colts offence did manage to put points on the board to build a reasonable total. However, the Chargers had obviously been watching the match against the Sabers and attempted the long ball approach. While the tactic did get them 18 points, much to the frustration of the Colts sideline, it backfired on the Chargers with Andy Brown returning two interceptions for touchdowns.

The Colts now sit in third place in Div 1, but have a huge task ahead of them if they are to overtake the Sabers for the second Play-off spot. The Glasgow Killer Bees remain unbeaten and should top the division by the end of the regular season.