The Broncos team traveled to Manchester for two vital league matches in their bid to make the National Finals in August.

This time last year, in the week after their trip to Big Bowl in Germany, what had been a promising season fell apart. With injuries to two key players the Broncos lost to the Sheffield Vipers and Sheffield Giants, effectively ending their chance of a play-off spot.

This year, the Broncos have an unbeaten start to their season, but the Big Bowl curse has struck again. The team headed south without one of their starters, Liam Fleming. Two other players, Joe McIlwaine and Ally Mundie were unavailable to travel, and with Kevin Woods working in the USA, it was a seven man team making the trip, and they would all have to keep their concentration to get anything out of the games. 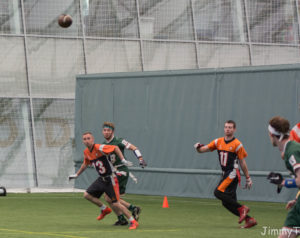 The first game against the Sheffield Vipers started with the teams getting an interception each. The early stalemate was broken when the Vipers were the first to score. But the Broncos experience meant there was no panic and they quickly got three scores to jump out in front 18 – 6. Sheffield are a really experienced outfit though, and refused to panic. They pulled a score back on their next possession, but again couldn’t stop a Broncos offence that wasn’t making many mistakes.

In the second half the Broncos may have got a little complacent and allowed the Vipers an early score. 24 – 18 was getting a little too close but head coach Fraser Thomson was quick to get his players focused again. From that point on, it was all Broncos. Two interceptions helped them to add three unanswered touchdowns and secure the victory 43 – 18. Sweet revenge after last year’s narrow defeat. 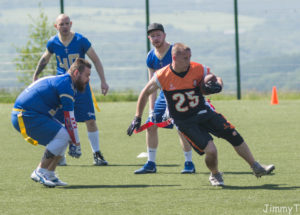 By this point, the Broncos were down to six players as Jimmy Thomson had dropped out with a pulled calf muscle.

Coach Thomson over the past few weeks has had the Broncos working hard on their Defensive strategy. It paid dividends in the first game, and came up trumps again against the Titans. Two big stops early in the game allowed Grangemouth to get a 13 – 0 head start. Inevitably, Manchester were going to score, to make it 13 – 7, and when they intercepted a Scott McKenzie pass their tails were up. But the Broncos Defence did it’s job and the offence then got a score in before half time. Broncos 20 – Titans 7.

In the Second half, the Titans seemed resigned to their fate. Missed passes and an interception meant their offence failed to move the ball early on. Two scores from the Broncos to lead 32 – 7 meant they were well in charge. A late score from the Titans did little to dampen the spirits of the Broncos who now have ten wins from ten games. With the Aberdeen Oilcats dropping games at another Manchester venue, Grangemouth are even closer to reaching their first National Finals for their Senior team.

The Broncos scorers on the day were Callum Woods 6 TDs and 1 XP, Calum Young 2 TDs, Matthew Ross 1 TD and 2 XPs and Scott McKenzie, Luke Morrice and Andy Brown all with 1 TD each.

With the rain and the low squad numbers, there were no pictures taken of the event. So all the above pictures are from last year’s equivalent fixtures.