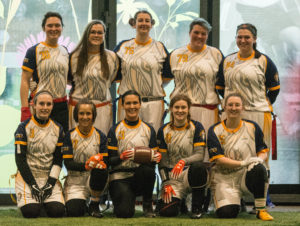 The Club’s Ladies team, the Grangemouth Fillies, made their competitive debut last weekend at Flagging New Year V. While they have had practice matches in the past this was their first Entry into a Ladies Only competition.
All of the Ladies teams were UK based. The Fillies played four well established teams who have all at some point made it to the British finals – East Kilbride Pirates, Hyde Park Renegades, Manchester Titans and Sheffield Hallam Warriors. The sixth team in the group were the Leeds Samurai Queens who have a couple of years competition under their belts and were involved in the Opal Plate competition in 2019. 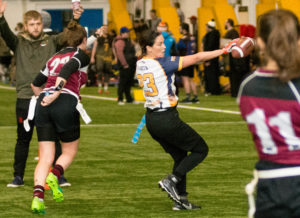 In their first game, the Fillies were playing the Warriors. In what was to become a theme throughout the day the Fillies defence were fantastic, containing the opposition and snuffing out their offensive drives. The Fillies offence, without the much needed game-time experience were unable to make much headway. They were completing the passes, but just not making enough yards.
Inevitably, the Warriors broke the deadlock with a touchdown and extra point, but that was all they got. A first interception for Caitlin Sherratt was one of the defensive highlights. Fillies 0 – Warriors 7.

In game two, Grangemouth played the East Kilbride Pirates Women, third placed in the UK in 2019. While the Defence were still playing well, the Pirates had just too many weapons, including ex-Broncos player, Louise Donnelly. The defensive highlight in this game was guest player Steph Warren getting three sacks, in part at least due to the Fillies coverage. The Pirates took the tie:-  Fillies 0 – Pirates 26 (We think)

In the game against the Queens next, the defence for the Fillies once again made stop after stop. But, all it took was one slip and the Leeds team got the breakthrough. While the Fillies offence once again failed to score, they were beginning to click and managed to move the ball up the field, just not into the end-zone. Fillies 0 – Queens 7. 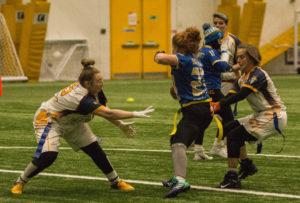 Game four was against one of the longest established ladies teams in the UK, the Manchester Titans. This was the point where the Fillies Offence began to get into synch. They got their first score of the day with a pass from Bethany Thomson to Megan Shelley. While the Titans did get a score back the Fillies confidence was high and they got a second score with a TD from Lyndsey McFadyen. As the Titans pushed to retake the lead, Shelley intercepted a pass and took it back to score and seal the Fillies first competitive win. Fillies 18 – Titans 7. 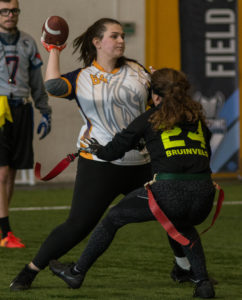 In the final group game the Fillies were facing the BAFA second placed Hyde Park Renegades. Again the defence were more than up to the task, holding a team with GB internationalists to zero points. As you might expect, the Renegades experience won out against the fledgling Fillies offence, so the result was a rare, and very unexpected, 0 – 0 tie.

So, at the end of the group stage the Fillies were in fifth place. That meant a double header against the sixth place team, the Warriors, for the final competition places.

While the Fillies still played well in the two games, their lack of experience of playing so many games began to tell. Despite scoring in each game, a touchdown in each for Michelle Holburn-White, the Warriors just managed to edge them. Fillies 6 – Warriors 6 in game 1 and Fillies 6 – Warriors 12 in game 2. 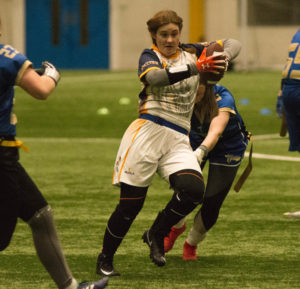 Fillies Head Coach, Callum Woods, was more than pleased with the team performance. “The girls were not out of their depth in any of the games. In fact, the win against the Titans and the two ties shows that all they lack is the game time experience. We will be doing our best to make sure all of the players get every opportunity to play in games over the next few months.”
In the final of the women’s competition the Pirates defeated the Renegades to take the Ladies title.

The Fillies players would like to thank EVERYONE that came out to cheer them on. The support means a lot to the team.

The team would also like to thank guest player Steph Warren for joining them on the field for the weekend. Her knowledge and experience meant a lot to the players. ANY time she wants to join in again….