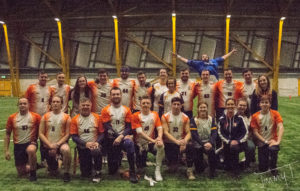 The Broncos were in attendance at Flagging New Year V along with the Fillies.
They have been at all five annual competitions. Over the past year the Broncos have been getting stronger, so there was some talk of them becoming the first team to win the competition for a second time. However, the FNY field seems to get stronger every year, and there were a lot of other teams who had ambitions of winning this year’s Silverware. Mass Flag, London Smoke, Ljubljana Killerbees, Glasgow Hornets, to name a few.
The Club were trying to ignore all of the hype because they knew that even in the group stage they would have to beat some tough opposition to reach the “Championship” bracket.

Coventry Cougars are an improving side and will play in this year’s BAFA Premier League, but the Broncos proved too strong for them. While the Cougars kept it close in the first half, Grangemouth accelerated away from them in the second period. Touchdowns from Ally Mundie, Matthew Ross, James Duffie and Callum Woods, three extra points from Ross, and interceptions from Liam Fleming and new signing Jamie Archibald gave the Broncos a good start, 27 – 12. 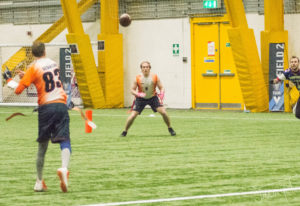 Against old rivals, Edinburgh Outlaws, the Broncos were more dominant with a 27 – 0 win. TDs from brothers Callum and Kevin Woods, Scott McKenzie and Steven Cliffe, another extra point from Ross on the offensive side, plus a Safety from Andy Brown, and interceptions from Luke Morrice and (ex-Outlaw) Archibald, all contributed to a comfortable win.

The script of the third game, against the Purmerend Barbarians from Holland, mirrored the first with the score close at the half, but the Broncos shutting them out in the second. TDs from Mundie (2), Callum Woods and Kevin Woods gave them a 26 – 13 win.

The Victoria Park Panthers were one team who might have upset the expected outcome of the group, especially with Great Britain quarterback Vince Macchi as a guest player. But the Broncos were on a roll. The Woods brothers and Matthew Ross got the points and Liam Fleming caught an interception in a 20 – 12 win.

The final game of the group was the undefeated Broncos versus the undefeated Slovenian Ljubljana Killerbees. In a “non-contact” game, this was a far more physical battle than it should have been, but the Broncos were determined to win the group. In theory, the Broncos would win the group with a tie, but knew they couldn’t play for that. Kevin Woods scored all of the Broncos points in this game and Fleming added to his interception tally as Grangemouth closed the group stage with a win, 20 – 12. 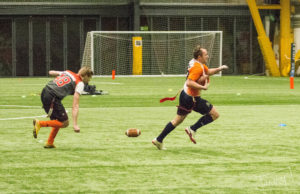 Winning the group meant the Broncos would face the second placed team from group four in the quarter-final. Normally you would expect London Smoke to win their group, but they had been up against Mass Flag, from USA. The Broncos have yet to find a way to beat the Smoke. With Smoke playing some of their best football, the Broncos went behind early and maybe lost a little of their usual composure as they pushed to get back on level terms. In the end, with both offence and defence struggling to break down London’s game, Grangemouth lost 0 – 20. They were out of the top four, now playing in the 5–8 bracket.

Their next opponents were Aberdeen Oilcats. Games between these two teams are always close, but recently the Broncos have had just enough to take some crucial wins. Sunday was no different. Two pick sixes from Archibald and a TD and XP from Callum Woods had the Broncos in a 19 – 12 lead when Kevin Woods intercepted a pass to effectively end the game.

That set up a game for 5th or 6th place against the Ljubljana Killerbees. This was another bruising game. With the Slovenian side seeing Kevin Woods as their main threat, Ross injured on the sideline and Callum Woods playing hurt, the Broncos still had ambitions of winning the game. Unfortunately, an early interception gave the Killerbees a two score lead and the Broncos were always playing catch-up. In the shorter tournament games that is a hard position to be in against such talented opposition. The Broncos ended the weekend with a loss, 20 – 32, but a creditable 6th place. 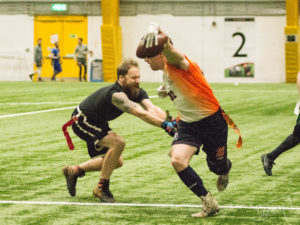 Later on, the quarter-final exit to the Smoke was out into some perspective, the London team beat the much fancied American team, Mass Flag, in an exciting final.

The Fillies came away from the weekend knowing that even in this early stage of the team’s development they can compete with some of the best teams in the country. They have learned so much from the experience. While there may be some disappointment from coming sixth, everyone was upbeat. Seven games in two days, their first win and two ties against some of the best in the UK. A great effort.

For the Broncos, sixth place (out of 24) is not a bad result, but we were aiming higher. Knowing that London are playing so well at the moment, especially beating Mass Flag, kind of makes the loss slightly easier to bear. But if we want to win this type of competition, and the 2020 league, we have to find a way to beat teams like the Smoke. It isn’t beyond us, but we will need to put the work in between now and April when the league starts.

Both of our teams had a great weekend and would like to thank ALL of the people who came out to support us. For taking our stats, for taking pictures, for taking video, for all the little things that helped us navigate our way through a very busy weekend.