The Club’s two teams had both set themselves targets as they went into weekend 3 of the BAFA leagues. The Broncos were aiming to keep their unbeaten status and remain top seeds in the Premier North, and the Colts were still looking for the form that took them to the Division 1 play-offs last year.
On Saturday the Broncos were at Glasgow for the first of the Cross-Conference match-ups with the MEC. They were playing two newly promoted teams, Nottingham Honey Badgers and Warrington Revolution, plus the Manchester Crows.
The first opponents were the Honey Badgers, who beat the Colts in last year’s play-offs. 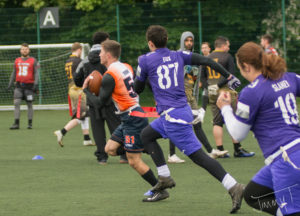 It may be that the Nottingham side expected the same result and got a little complacent, but when the Broncos shot out to a 21 – 0 lead after only six offensive plays they quickly realised this was a different team. To their credit, the Honey Badgers never lost their heads and kept playing until the final whistle, but they were completely out-matched by the Broncos. Even with some rotation of players and roles in the second half the Broncos won comfortably, 72 – 6.

Warrington Revolution were the next Broncos opponents. They too are also a newly promoted team, but it took the Broncos a while to break down their defence. QB Scott McKenzie said on the day, “I’m not sure they have a defensive scheme. They seem to be in random places.” Eventually, the Broncos made the breakthrough and once they did, it became very much “business as usual”. The Broncos end-zone was rarely threatened by the Revolution offence, so the 49 – 0 win was well deserved.
The Broncos third game of the day was against the Manchester Crows. In past match-ups the Broncos have proved too strong for the Crows, but an earlier win for the Crows over Glasgow Hornets meant we would have to be at our best to maintain our 100% record over an improving Manchester team.
In a back and forward match both defences were playing well, limiting the opposition opportunities. 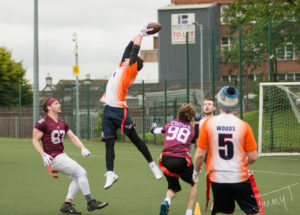 The opportunities that did come, the Broncos took advantage of. Two scores in the first half gave them a 13 – 0 lead, and a third just after the break put them in command. 19 – 0. But the Crows still had some tricks up their sleeves and got a score back, then a second. As time was running down they had an opportunity to take the lead (and it would have been the win) but Liam Fleming rose highest in the end-zone to intercept the pass to give the Broncos the win.

Three wins from three games, outscoring their opponents 140 – 19 was a tremendous result on the day. Unsurprisingly everyone in the Broncos squad put some points on the board. QB McKenzie may not have got into the end-zone himself, but he threw for 16 Touchdowns and 7 conversions. Kevin Woods scored 6 TDs and 4 XPs, Mathew Ross 3 TDs (and threw for a TD), Luke Morrice 2 TDs, Joe McIlwaine 1 Interception returned for a TD, Callum Woods 5 TDs and 1 XP (and threw for a TD), Jimmy Thomson 1 TD, Calum Young 1 TD, Liam Fleming 2 Ints returned for TDs and 2 XPs.
The Broncos remain top of the BAFA Premier North with 8 wins from 8 games.
After the excitement in Glasgow, the Colts were hoping to emulate their club-mates achievements in Edinburgh but so far their form this season has been under par. While they have been competitive in games, they have so far only beaten the winless Chargers and the one-win Raptors.
Not for the first time in their last few meetings, the Colts went ahead early against the unbeaten Glasgow Killer Bees and had a 12 – 7 half time lead. But the Bees seem to thrive on come back wins. Two scores in the second half meant Glasgow held the advantage 20 – 13. The Colts did have time for one last attempt to steal the game, but came up just short. 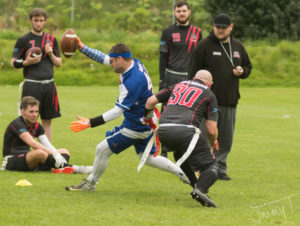 The Colts then went straight into our second game against the Renfrewshire Raptors. All of the matches between these two have been close results and the Raptors must have thought it was going to be the day for their first win when they were ahead 20 – 12 at the half, and then extended their lead after the break. But the Colts kept their composure, scored the next two TDs. When when John Heron scored on an intercepted pass the Colts were in the lead. The Colts’ tails were up and the Raptors seemed to succumb to nerves. The Colts score another two TDs to put the game away. 34 unanswered points for the come-back win, 44 – 27.

In their final game of the day the Colts were facing the Aberdeen Silvercats. In their last meeting the Colts let their frustrations get the better of them in the pouring rain in Aberdeen. True to form the rain started at the beginning of this match, but when the Colts made light of the fact, it quickly stopped. 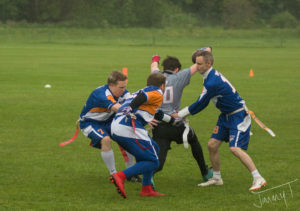 With their confidence boosted from playing well in both their previous matches, the Colts were ready for this game. They worked their way to a 12 – 0 lead before Aberdeen seriously threatened their line. But the Silvercats have too many good players to be kept out of the end-zone for long. 12 – 7 at the half, the Silvercats were next to score to take a 14 – 12 lead. No panic this time from the Colts and they took the lead back. Holding a 19 – 14 lead as the clock was running down, the Colts were looking to use as much of the clock as possible, so it was a bonus when the field opened up to let Steven Cliffe score to give the Colts an eleven point lead. When Aberdeen failed to score on their next drive the Colts ran the clock out for the win.
Andy Brown at QB threw 11 TDs and 4 XPs, John Heron scored 3 TDs (including the interception), James Duffie 5 TDs and an XP, Kristopher Walker 3 TDs and 1 XP, Steven Cliffe 2 TDs and 2 XPs.
The two wins on the day has now put the Colts back in the race for second place in the league. It is unlikely that the Killer Bees will be caught if they maintain their form, so the Colts have to target beating Midlothian Sabers, who have improved significantly this season, if they are to reach the post season play-offs again this year.