The Broncos were in Germany over the weekend of 1st-2nd June, playing in one of the biggest tournaments in the world. Big Bowl XIII, run by the Walldorf Wanderers organisation, had 48 teams in the Mixed competition and 15 in the Ladies’. There were teams from Europe, North America and South America all taking part in what has become a major event in the Flag Football Calendar.
This was the second year that the Broncos had entered a team. Last year the Broncos came in at a creditable 26th place, with a number of “more fancied” teams below them in the rankings. 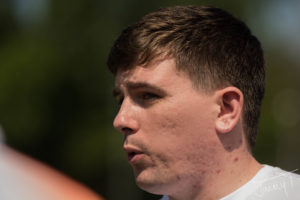 Broncos Head Coach, Fraser Thomson, said before the tournament, “The competition at Big Bowl is intense. Some of the best teams in the world come to this tournament to gain experience of playing in such a high calibre field.”
“The Broncos are no different. We are already playing at a high standard in the UK, but in order to improve we have to play good quality sides who may have a different style. Big Bowl gives us that opportunity.”
“Our aim this year is to improve on our placing from last year. We didn’t play badly last year, we just missed some opportunities, which in this type of tournament can be costly.” 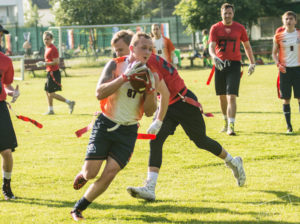 The Broncos played five group games on Saturday. With only two teams from each group advancing to the top 16 bracket, they knew that had to beat either the Allerod Armadillos (Denmark) or the Valencia Firebats (Spain), two teams who have been to the Flag Equivalent of the Champions League in the last couple of years.
They would also have to beat two English teams, Nuola Alliance and London Stormers, plus the German ILM Roosters. None of which were likely to be walkovers. 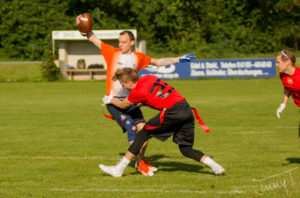 In the first game of the day the Broncos had to be up early to meet the Armadillos. In the shortened tournament format, any mistake can put you in a hole that is difficult to get out of. With the Broncos failing to score, and a miss-communication leading to a pick six, the Broncos found themselves behind 0 – 21 at the half. In the Second half, Grangemouth found their rhythm and scored with a pass to Ally Mundie, then again when Jimmy Thomson beat the Danish defence to a long pass in the end-zone. With the Broncos reducing the deficit to 12 – 21 Allerod realised they were in a game, but their tournament experience meant they knew they just had to use up the clock. A late score for the Armadillos padded their victory slightly. Broncos lose game one 12 – 27. 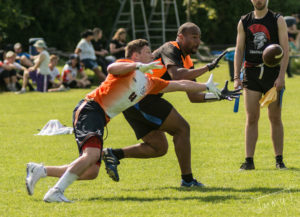 Game two was against the ILM Roosters, a German side who are regulars at Big Bowl. While the pundit’s money was on the Broncos, they couldn’t get complacent. 2 TDs from Matty Ross(plus an XP), and a TD each for Liam Fleming and Jimmy Thomson saw the Broncos win reasonably comfortably, 25 – 13. 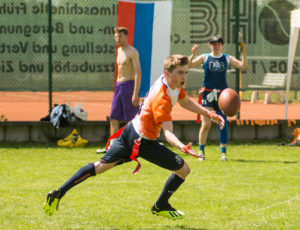 Game three came as the temperature soared into the 30s, and it was against the Valencia Firebats. From beginning to end, this was a close game. Both teams were scoring TDs, but the Broncos missed their XPs, so were behind 12 – 20 as the second half was winding down, but felt in control as they drove the length of the park. But all it takes is one missed fourth down. The Firebats scored as time expired to make it 26 – 12. Broncos scores coming from Scott McKenzie and Ally Mundie. 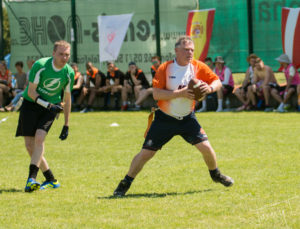 The next game was against the London Stormers. The Broncos were probably at their poorest in the first half of this game, especially when Liam Fleming went out with a twisted ankle. 0 – 12 down approaching half time, they did manage to score with a pass to Luke Morrice as the clock hit zero. When they scored early in the first half, a TD for Ross and an XP for Mundie, the had the lead, but only briefly. So the next score was vital. A second TD from Ross in this game meant they were in front and smart clock management meant the Broncos won a “tighter match than it should have been” game, 19 – 18. 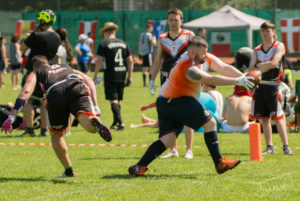 In the final game of day one, the Broncos faced Nuola Alliance, a regular tournament team made up of North of England players. Two more TDs and an XP from Ross, an XP from Morrice and Euan MacLean’s first TD for the Club saw Grangemouth win 20 – 0 in a game where they were rarely troubled.

At the end of Day One, having lost two games, Grangemouth were out of the top 16 play-offs, but had guaranteed themselves a better position than last year playing in the 17 – 24 bracket.
Looking towards Day Two, the worst case scenario would have been to play the third place team from Group A which had four teams well capable of winning the tournament. That was exactly how it turned out. 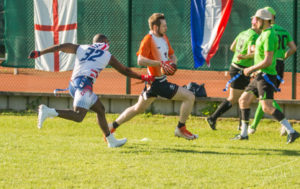 The Warriors was a select team from the USA. The Broncos were definitely up to the challenge of this game, but the TD from Ross and XP from Mundie were not enough to win the game. The Warriors took the game 20 – 7, and eventually topped the bracket. 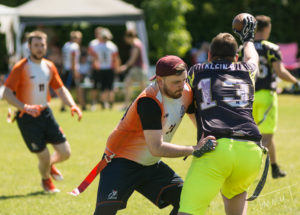 Now playing for a highest spot of 21st, the Broncos played the Maichingen Mustangs. The Mustangs just edged the Broncos out of 25th place last year in the final play of a tight game, so the Broncos will have been well satisfied with a “revenge” win, 21 – 18. Ross getting two more TDs, Morrice 1 TD and 1 XP and Mundie with 2 XPs. 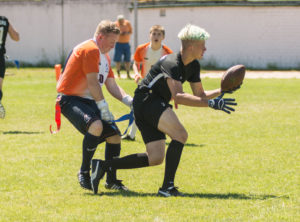 The Broncos final match of the weekend was against a local team, the Wurtzburg Wombats. In last year’s group stages, the Broncos beat the Wombats who eventually went on to claim 8th place. In this year’s game, while the scoreline suggests a close game the Broncos always looked in control. Touchdowns from Ross, Mundie and Joe McIlwaine, plus an XP from Thomson gave the Broncos a 19 – 13 win.

Coach Fraser Thomson really pleased with the way the weekend had gone.
“We played eight games and lost only three. Two to teams that are in the top dozen or so in Europe and one to a Team America selection. And that was without a full squad. I really look forward to seeing how far we can go when have all of our first choice players available to go to the tournament.”
The eventual winners of the Tournament were the London Ex-Pads, a team of expatriot Americans based in London, who beat the home team Walldorf Wanderers in an exciting final.

The Broncos would especially like to thank all of the friends and family who traveled to Germany to support the team. 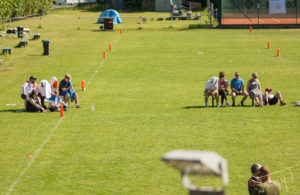