On the 20th/21st of July, two of the Grangemouth Flag Football Club’s teams were competing in their final game days of the BAFA Leagues Regular Season.

The Grangemouth Colts, on Saturday, were hoping to do enough to get themselves into a position where they had a chance of competing in the Division 1 Plate Competition. On Sunday the Grangemouth Broncos were aiming to win the BAFA Premier HNC League.

In their last game day the Colts broke the unbeaten run of the league leading Glasgow Killer Bees. In their first game last weekend they were aiming to be the first team other than the Killer Bees to beat the Midlothian Sabers. The Colts knew they couldn’t take the second place in the league from the Sabers (short for Sabertooth), but without two wins on the day they had no chance of any post-season action.

In the two previous matches this season the Colts have matched the Sabers for long periods of the game, but on both occasions have switched off at the wrong time giving Midlothian a cushion the Colts couldn’t overcome. 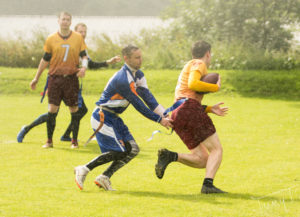 This game started in heavy rain, but both teams coped fairly well. The Sabers got on the score sheet first, but the Colts responded immediately. The first half continued like that until close to half time when the Sabers got two scores in front. It looked like this game was going to continue the recent pattern.

However, whatever was said in the half time talk by Head Coach Fraser Thomson, it worked. The Colts defence were outstanding and continually stopped the Sabers building on their lead. That seemed to inspire the offence. So while the Sabers failed to score in the second half the Colts clawed back and surpass the deficit with a risky two point conversion. A 28 – 27 win. 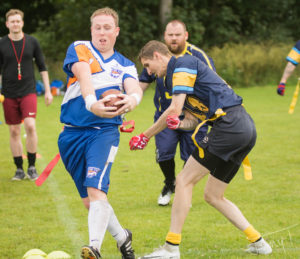 First part of the job was in the bag, but they then had to beat the West Lothian Chargers. The Colts have never lost to the Chargers, but with a few bodies missing the Colts were a little nervous about facing an improving Chargers team.

However, as the Chargers tried to get inventive to somehow work at least one win in the league this season, the Colts remained calm and just go on with the job in hand. In fact it wasn’t until deep into the second half that the West Lothian hosts crossed the Colts line. By then though the game was well out of reach. The Colts won 26 – 6.

Kristopher Walker was the Colts top scorer on the day, but only just, from John Heron.

Both had three touchdowns, but Kris also score a one point and a two point conversion. James Duffie scored one TD and two conversions, Andy Brown ran in for a TD and Gordon McSherry scored a conversion. Duffie also accumulated an impressive six sacks in the two games.

After the games were over, it was a nervous wait for the Colts as they watched results come in from the five Div 1 leagues in England. When all of Saturday’s results were in the Colts were in the 8th and final spot for the Plate Competition, but there were still a lot of games to go. By the end of Sunday as each of the teams who could eliminate the Colts lost games, the Colts found themselves still in the competition. When the final result fell their way there was a huge cheer from the Colts players and supporters.

So in answer to the question…