After the two good results from the Colts on the Saturday it was up to the Broncos to make it a memorable weekend.

They played host, at Grangemouth Rugby Club, to the rest of the BAFA Premier HNC teams on Sunday 21st July. They knew they had secured themselves a place at the National Finals in August, but they needed at least one win to take the HNC League title. Two wins would give them the second place overall seeding at Finals day. 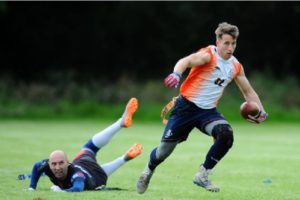 In their first game the Broncos were up against the Inverclyde Comets. The Comets form this year has been erratic at best. With a host of good players on their roster they should have had better results, but because some of those players have also committed to tackle American Football have rarely fielded a full squad. Sunday was no exception. With no regular quarterback in their team they rarely threatened the Broncos defence. By half time Grangemouth led 27 – 6. That gave coach Fraser Thomson the opportunity to rest some of his starters for the second game, and give some of his back-ups a bit of game time. That meant the Broncos were not quite as dominant in the second half, but they still got the job done. Two touchdowns each for James Duffie and Gordon McSherry, Scott McKenzie, Jimmy Thomson and Callum Woods each with one touchdown. Mathew Ross added three extra points and Woods got two. A 47 – 19 win.

That win gave them the BAFA Premier HNC title, and the top seed spot for the North of England and Scotland region. Self-proclaimed “Kings of the North”.

Their second game of the day was against old rivals, the Aberdeen Oilcats. It has been five years since the Broncos beat Aberdeen twice in the one league season, so they knew the task ahead of them. 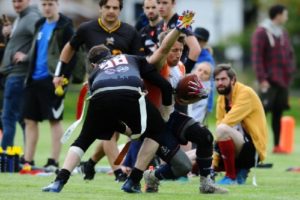 The task got even harder when the Oilcats intercepted the first pass from McKenzie leading to an early deficit. But the Broncos stayed calm, stuck to their game plan and worked themselves into a 19 – 7 half time lead. Starting with the ball in the second half Grangemouth extended their lead immediately, and while the Oilcats got a couple of scores, the Broncos were matching them.

With the two wins on the day the Broncos finished the regular season with 14 wins and one loss. That means they go into the National Finals in Manchester next month as second seeds overall.

In the other games played out on Sunday, the Comets were confined to the automatic relegation spot, Edinburgh Outlaws will play Div 1 second place Midlothian Sabers for Premier survival, Glasgow Hornets confirmed their spot at finals, and Carnegie Flag (from Dunfermline), with the aid of some unexpected results in the North of England booked their place in the play-offs ahead of Aberdeen. Aberdeen will play in the Premier Plate competition (the competition the Broncos won last year).

Images by Michael Gillen of the Falkirk Herald.